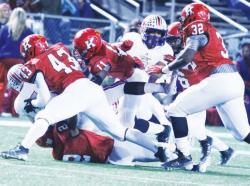 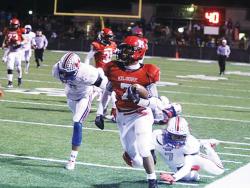 Friday night Kilgore Bulldogs and Henderson Lions went head to head, Kilgore defeating the Lions for the third straight year with a 24-18 win, (4-6 overall this season). The game did nothing, in reality, to the District 9-4A Division I standings. Henderson still goes in as the No. 1 seed; Kilgore will play Jasper Thursday night in Lufkin, at Abe Martin Stadium.

For the Bulldogs, Justice finished with 160 yards and the touchdown on 18 carries. Caylon Williams had 30 yards rushing, and Smith had 19. Galvan averaged 33 yards per punt, and Torres hit all three extra points and the field goal just before halftime.

Colbert went 4-of-11, but all four were big completions, for 105 yards and two touchdowns to Orange and Wallace. Orange had two catches for 13 yards and the score. Wallace had the 80-yard TD catch, and Toombs had the catch that set up the field goal.

The win, Kilgore’s third straight in the series, gives Kilgore a 45-29 -6 record against Henderson, all time.