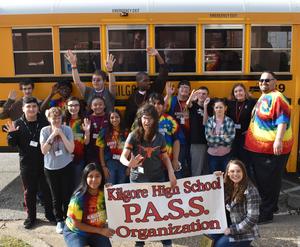 KHS PASS wins 2nd place for Best Decorated Float and 2nd place for Best Use of Theme at 2019 Kilgore Christmas Parade.
The Kilgore High School P.A.S.S. (Peer Advocates for Special Students) Organization participated in the 2019 Kilgore Christmas Parade with the theme of  the 12 Days of Christmas. Thinking outside of the box, students came up with the idea of doing the Hawaiian 12 Days of Christmas. All 72 PASS members worked very diligently up to the last minute -- "literally" the last minute!! -- putting everything on the Christmas float.
Kilgore High School is extremely proud of all the P.A.S.S. students who helped with the float: Kason Hill, walked as the Bulldog Mascot and dressed up with Hawaiian accessories.  PASS members Alondra Sanchez, Jacqucline Maldonado, Joanna Cedillo, Cameron Lewis, Hailey Estrada, Victoria McFadden, Katherine Domogalla, Cheyanne Jones, Azeneth Barrera and Kayla Whatley walked beside the float and passed out Hawaiian leis to the crowd.
Students and teachers were pleasantly surprised when they learned that they had placed in the top three for this year's parade.  Even better, they actually won two awards:  Second place for Best Decorated and Second place for Best Use of Theme. This was PASS' first year to participate in the Kilgore Christmas parade.